Left: Tareq Salahi being presented a trophy by His Royal Highness, Prince Charles after the historic USA vs. England polo match.

TOP 10 in the WORLD: Tareq's wines take Top 10 in the world by Wine Enthusiast Magazine

WINNER:  Best Tourism Person of the Year - Chamber of Commerce

HONORS:  Life Time Member/Contributor to the only US National Park for the performing Arts "Wolf Trap"


Join Salahi at one of his next events - whether it be a cruise, polo event, wine country escape...  enjoy the expertise by Tareq Salahi when it comes to wine, food and travel and let him be your guide on your next special event!

Welcome to the official 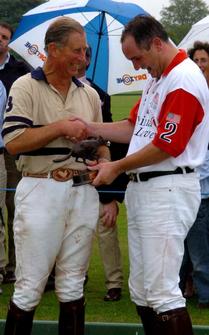 WHO IS TAREQ SALAHI:

Tareq is an award-winning entrepreneur, travel/tourism and marketing expert, IPT Captain of the USA Polo Team, winery owner and television personality rated in the Top 5% of social media influencers in the world.

Tareq was born in Washington DC and raised in Virginia wine country. He graduated from Randolph-Macon Military Academy where he was distinguished with the rank of Squadron Commander. He went on to earn a Bachelor of Science degrees in Enology & Business Management from the University of California, Davis.

He was raised on his family vineyard, where his love of viticulture and wine was nurtured at a young age.  He and his father planted some of the first Chardonnay and Cabernet Sauvignon vines in Virginia in the late 70s, later opening the Oasis Winery in 1977.  Tareq's sparkling wines were produced methode champenoise and Oasis Winery was recognized by the Wine Enthusiast Magazine as Top 10 producers in the World.

Tareq is a International polo player and one of the founding members of the Great Meadow Polo Club & the IPT.  He has played polo all over the world and has won several IPT World Cups and USPA National Titles.   Tareq was honored to play against HRH (His Royal Highness), Prince Charles with Prince Harry; and on that historic game Prince Charles announced his retirement from the sport of polo.

His television career began with the CW's "Where the Elite Meet" which led to various TV Shows including NBC/Bravo Television's Real Housewives franchise and onto other projects with HBO, Discovery and E! Network. He has also starred on "Celebrity Fight Night" and made multiple appearances on the entertainment news and talk show circuit including NBC's Today Show, Access Hollywood, E!, Extra, David Letterman, Fox & Friends, CNN, etc.

Tareq was directly involved in shaping policy that helped create jobs in the United States and both authored and supported legislation beneficial to numerous small businesses and family businesses which passed with resounding bipartisan support in the House & Senate. He has supported and contributed heavily to both political parties.  His early years in politics included working on the Steering Committee for "Rock the Vote" movement aimed at activating the youth vote.  He continues to work with the private sector as well as federal, state and local government to come together to promote Travel & Tourism and ensure its success.   Tareq has also made numerous appearances at various events worldwide including Universal Studios, PURE nightclub at Las Vegas' Caesar's Palace and the US Congressional Committee on Homeland Security and the White House.

Tareq Salahi sat on the board of the American Task Force, an organization that worked closely with the heads of state from the United States, Jordan, Israel & Palestine dedicated to the peaceful two state solution between Israel & Palestine (see: United Nations Security Council Resolution 242).

Historical relationship to the Holy Sepulchre:  The Church of the Holy Sepulchre in Jerusalem is identified as the place both of the crucifixion, the tomb and resurrection of Jesus.  The Salahi & Nuseibeh family are related through Mr. Tareq Salahis paternal grandmother (Nuseibeh) on his father’s side, Dirgham Salahi, and the family have been the keepers of the holy key from the 11th Century to the present where Tareq's great Uncle is in charge of the Holy Sepulchre.

Today, Tareq lives much of his adventurous life traveling and mostly works/lives on cruise ships and enjoys discovering new cultures and experiences worldwide;  You can purchase cruises directly from Connoisseur Traveler or Hotels at Sea® by clicking here.   Or you can catch him on tour advocating for the sport of Polo & cruise line luxury tourism industry.  Click here for the polo tour schedule